This week’s nomination for the inaugural AFL NSW Hall of Fame.
Neil Cordy profiles the nomination of ex-team-mate and former neighbour Rod Carter. 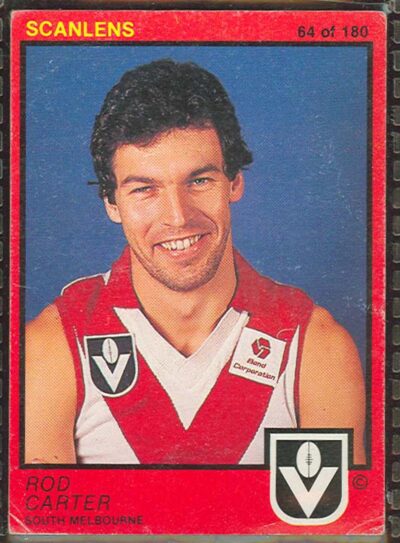 Swans champion full back Rod Carter took on some of the greatest full forwards in the game’s history but tangling with Tony Lockett, Jason Dunstall and Malcolm Blight was nothing compared to engaging with the student body at Cleveland Street High School in Sydney’s inner west.

In between his stoushes with footy’s best Carter was living his version of the ‘Blackboard Jungle’ through the 1980s when the school had the reputation as Sydney’s toughest.

“They had all these PE teachers who came in and couldn’t get out quick enough, it finished them,” Carter said.”

“You could imagine their surprise when I said I wanted to work there. When I went to ‘Clevo’ I told the lady at reception I wanted to work there, she stared at me like I was on drugs. She asked me what I taught and when I said Phys Ed she said don’t move. She ran down the corridor shouting Bob, Bob, Bob. Bob was the deputy and he gave me a job on the spot. I ended up teaching geography, history and PE.”

Getting the job was the easy part, keeping it was the challenge for most of Carter’s colleagues. ‘Clevo’ had the highest turnover of staff in New South Wales and many staff were left in tears trying to control the rowdy teenagers. As his opponents know Carter is made of stern stuff and his reputation among the boys received a massive boost when one of his students saw the less friendly side of his personality on the footy field.

“One of the boys was selling ice creams at the SCG,” Carter said.

“He would walk through the aisles with his tray. He looked over the fence one day and saw me punching on with the full forward. He packed himself and went back and told all the kids at school. He put a bit of mustard on the story and voila all the kids were scared of me. It worked a treat.”

Carter’s ability to deal with challenging situations on and off the football field was a hallmark of his time in footy and has made him one of NSW football’s greatest contributors.

Few have helped footy on as many levels.

He played 217 games for the Swans and was one of the pioneering players who made the move from South Melbourne to Sydney such a success. He was very unlucky to have fallen short of the 300 game milestone finishing up stranded on 293 games.

“Finishing my career in the reserves was really disappointing, Carter said.

“I’d played 76 for Fitzroy and then played in the VFA for Port Melbourne. “I was proud of the fact I was able to come back and play for as long as I did with my second run at it. I don’t have any regrets. Tommy Hafey rang me as did John Northey who asked me if I wanted to play at Melbourne and get my 300. Things don’t always work out how you want it but I’ve met some great people in footy. They (Hafey and Northey) were real footy people and knew the game, it was flattering.”

Carter’s next move was into coaching where he led Sydney University to a premiership in his first year in charge in 1992.

“They used to be easy beats,” Carter said. “The first game against Campbelltown was a taste of what was to come. I copped a whack so I gave it back. Then the next game against Wests was the same only this time my teammates came from everywhere and started throwing cut lunches. They’d been on the receiving end for so long and they were enjoying fighting back. I’d never played or been involved with senior footy outside the AFL. I enjoyed the year immensely, to get the bonding you do at that level was fantastic.”

Carter was also making moves in his other career, moving from Cleveland Street to James Cook High School at Kogarah and then to the NSWAFL and a job in development.

It was hard work trying to introduce the code to Sydney’s private schools but there was enormous enjoyment coaching the state under 16 and under 18 teams and coming across some of the state’s best talent including Mark and Jarrad McVeigh, Lenny Hayes and Nick Davis.

The talent of the McVeigh’s, Hayes and Davis was something Carter enjoyed being involved with but it was a couple of surprise packets he took special pride in, Kieren Jack and Lewis Roberts-Thomson.

“People didn’t see what Kieren had as a player,” Carter said. “Kieren was one that I was really happy with from the point view of the game in NSW, he was a kid who worked really hard and developed in our programs.

LRT was a gem. I remember watching him at Kelso Oval when he was playing with Sydney’s best kids. He played in the ruck and at the first centre bounce he put his knee on his opponent’s shoulder. That was enough for me and I thought we’ve got something to work on. Even by the time he made his debut for the Swans he wouldn’t have played 50 games of footy in his life. Had you stopped the game at half time in 2005 he would have won the Norm Smith Medal.”

While talent identification and player development were huge Carter’s biggest achievement was the creation of the Paul Kelly Cup where Kieren Jack first came to prominence.

“When I was working for the AFL the development officers were having trouble getting into schools,” Carter said.

“We have to cater to them and move to the market, I came up with the Paul Kelly Cup. It was a struggle to get 20 players for a match so 12 a side was perfect. It’s now the biggest sporting competition in Australia.”

After a decade at the NSWAFL Carter moved became a recruiter for Collingwood and found some outstanding talent including Penrith’s Mick Hartley and Bowral’s Tom Young. But his biggest find for the Magpies was ruckman Jarrod Witts who is now captain of the Gold Coast Suns.

“I went out to St Ives to watch some kids and Jarrod came out in the warm up and he bent down and picked up the ball clean as a whistle,” Carter said.

“He was 6’6” and 15 years old and playing rugby at school in Barker’s first XV. By the end of the warm up I was on the phone to Derek Hine (Collingwood’s recruiting boss). I said forget the other kids this is the bloke we need to get before someone else does. To Derek’s credit, he rang Jarrod’s dad and got on a plane the next day and signed him.”

Carter turns 66 at the end of October and has witnessed first-hand the enormous gains the code has made north of the Murray. He can safely lay claims to as one of footy’s most important people of the last 40 years.

“It’s great seeing the change in the landscape,” Carter said. “I remember a meeting at St Ignatius of all Sydney’s private school sports masters in 1998 and one of them got up and said they rated Volleyball higher than Aussie Rules. I was drummed out of the meeting unceremoniously. To change things so quickly the AFL has to be pretty happy with itself.”