Australian Football celebrates its 140th anniversary in NSW this year after the founding of the NSW Football Association in Sydney in 1880.

Dr Rod Gillett profile the nomination of Doug Priest to the Hall of Fame. 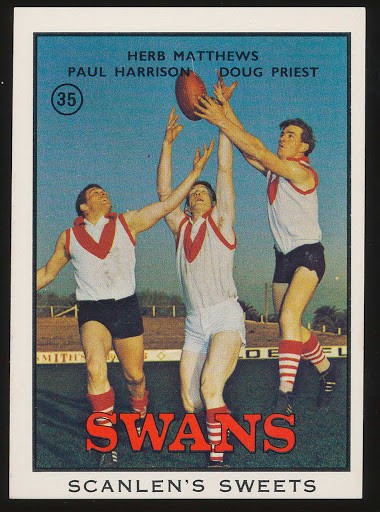 When Doug Priest was appointed captain-coach of Ariah Park-Mirrool in the South West League in 1970, the coach widely regarded as the greatest ever, Norm Smith, then coaching South Melbourne gave him a copy of his prized coaching notes.

Doug had been captain of South’s Reserves team at Smith’s behest as a result of his leadership qualities being revealed at the club after being recruited from Holbrook in southern NSW.

“The notes were very practical and provided a strong basis for my coaching philosophy but I still had the challenge to put the ideas into practice” Doug told me for this interview.

Working as a selector alongside another all-time VFL coaching great Allan Jeans, who coached the NSW State teams playing in the national club championships in 1979-80, provided another dimension to Doug’s coaching.

“Jeansey taught me about ‘man-management’; he really knew how to get the best out of individual players while Norm (Smith) was more old school, strong on discipline and values. I learn a lot from both”, Doug told me.

“My first senior coach, Brian Prior (ex-Footscray) also taught me a lot, particularly in relation to team-work and leading from the front. He was a terrific person as well as an excellent coach”.

And, of course, my first junior coach was my father Merv, who got the juniors going in Holbrook when he went there to work in the late 50s” Doug added.

Doug’s father, Merv is also one of the Riverina’s greatest players with a fine record as a player and coach with Rannock, Coolamon, Ganmain, and ultimately with Wagga Tigers.

A player named Priest on a football field in the area started with Doug’s grandfather Norman, who first pulled on the boots for Methul in 1912. The tradition continues with Doug’s grandson Kobe making his way through the grades at Wagga Tigers.

Doug began playing senior football for Holbrook in the Farrer Football League in 1962 and was a member of the 1964 premiership team under ex Footscray defender Brian Prior that beat Temora.

Doug played a leading role in the 1977 premiership victory over archrivals North Wagga under the illustrious Laurie Pendrick, with whom Doug shared the competition best and fairest award, the Baz medal.

He retired after playing in the 1978 premiership under ex Melbourne and Glenelg player Colin Anderson, who had taken over from him as coach.

Then he begun  highly successful involvement in representative football as a coach and selector while continuing involvement at Wagga Tigers in all manner of off-field roles (including president 2008-09) that continues to this day with leadership of the club’s history project.

Doug coached the Farrer league to great success during this period including three State Championship victories, the most notable being in 1980 when the bush boys beat a star-studded Sydney team coached by ex VFL star Sam Kekovich, then coaching Newtown, at Deniliquin.

Down by 8 goals at half-time, the Farrer team showed enormous spirit and courage to prevail over their more fancied opponent following a spate of injuries. This followed previous coaching triumphs in 1976 and 1978.

Following the restructure of the leagues in the Riverina in 1982, Doug took on the task of coaching the Riverina Football league (RFL) rep team in the Victorian Country Football League (VCFL) championships.

Doug bought together the players from old rivals Farrer and South West to defeat the Wimmera league, but to lost by 7 points to eventual champion, the Ovens and Murray league. It galvanized the players and officials in the new competition.

Doug’s sons, Steven and Andrew, have followed in the footsteps of their forebears. Both have played nearly all their football with Wagga Tigers, and between them have won a staggering fifteen premierships!

The Priests have made an indelible mark on the game in the Riverina in so many ways and at so many levels, with Doug at the top of the class with his superb record as a player, coach, and official.

“…one of the most highly regarded footballers, coach, and later non-playing coaches in Riverina football” according to the history of the Ariah Park-Mirrol Football Club 1953-1983.