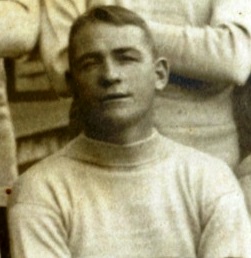 There is a message in this for those who might be prone to take a short cut and walk across an Australian football field, rather than around the boundary.

In 1907, Bob Errol (pictured), who was a pretty fair player of the game was charged with ˜maliciously inflicting grievous bodily harm” upon one such person.

Errol was playing for the YMCA side in a Sydney competition match against East Sydney on Moore Park in Sydney. Now this ground would have been directly opposite the SCG between Driver Avenue and what is now Anzac Parade.

A seventeen year old, Thomas Lambert, together with a couple of mates had just left the Sydney Cricket Ground after watching a rugby game between University and Glebe and began to walk across the field of play whilst the Australian football game was in progress.

They were abused by the footballers telling the group in no uncertain terms to ˜get off the ground” and ˜give the players a chance.” Lambert and co. refused and retorted in an aggressive manner that the game was “a dirty rotten Australian game.”

The three lads stood in front of the not so tall ruckman, Errol obstructing his path towards the ball. ˜Give me a chance” he requested of the trio but they came to him in a menacing manner using what was described as ˜filthy language.”

Lambert threw a punch at Errol, but he was picking on the wrong man. At 26 and a former professional fighter Errol fended off the blow while another grabbed him around his shoulders.

It was then that Errol threw a straight left which broke Lambert’s jaw.

This action eventually saw Errol in the Sydney Quarter Sessions at Taylor’s Square in Sydney before a judge and jury.

Errol had some very well regarded persons on his side with a number of these giving supporting evidence. One of whom was the former legendary Sydney footballer, Harry Hedger, a magistrate and a member of the board of directors of the Young Men’s Christian Association as well as a vice president of the NSW Football Association.

He was found not guilty with the jury concluding that Errol, a nine time representative player, had acted in self-defence.

Army
Errol had served with the Third Victorian (Bushman’s) Contingent in the Boer war and later in Gallipoli, where he said of his time: ‘I was blown clean out of a trench by a shell and now I am stone deaf, and suffering from shock, but I understand they are going to send me back to Hell’s hole ” Gallipoli, but I don’t mind.’

Errol was discharged from the army in 1916 but re-enlisted for garrison duty in Australia. He died of wounds in 1924.