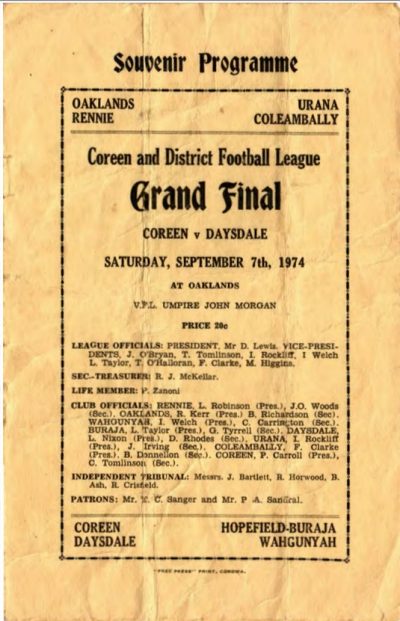 The New South Wales Australian Football History Society is in the process of displaying Football Records (match day programmes) published in this state, on its website.

It has over 4,000 such documents from Sydney, Riverina, Hume, Broken Hill, Newcastle and other parts of the state which can be accessed free via this link: https://www.nswfootballhistory.com.au/football_records/

Recently, mostly through the agency of former Coreen Football League Secretary, Lindsay Norman, the Society posted over forty Football Records from that league ranging from 1957 – 2007.

There are however a few gaps including 1965 – 1977 grand final publications then a number of various finals editions right through to the last game of the league in 2007.

The Society is seeking anyone who may have copies of the missing Records so they can be scanned and posted along side the current list.

“We are happy to receive these documents which we will copy and post on our website”, Society President, Ian Granland said.  “These will then be returned to the owner.”

This is a once in a lifetime opportunity to record the events, players, games and officials of the Coreen FL so that they can be viewed by everybody, “not kept in a box in the garage.”  History like this must not be lost.

So much is the importance of this project that both the NSW and Victorian State Libraries have links to the Society’s Football Record repository.

The Society can be contacted at: admin@nswfootballhistory.com,au or the president on 0412798521.

If you’re a bit lost now that the footy season is over and you are waiting for our next post, have a look at our ‘Snippets of Interest‘ page, just click the name.

Some will make you laugh, others with astound you.  There’s lots of reading there. 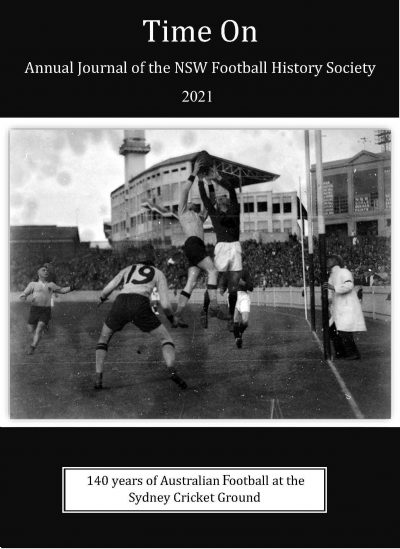 History Society Officials have advanced a little further with the design of the front cover of this year’s journal.

The attached 1933 image of NSW v WA in the ANFC Carnival gives a general idea of the presentation with a a further idea to have the black and white image coloured.

The Journal, ‘Time On’, is sent out to all members of the Society at the end of each year as part of their membership package.  It contains a myriad of stories about people, incidents, grounds and games etc. that occurred in NSW over the years.  It also normally contains several book reviews.

The Journal publication is a hard copy document and one members look forward to receiving each twelve months.

The nomination forms for the Harry Hedger Publication Award (book/article/visual/podcast) etc. are available by clicking here.

The Gus McKernan Award for the most comprehensive Annual Report/Yearbook are available by clicking here.

Each year the Society produces a journal which includes many stories and articles which have been published on this site over the past 12 months or so.

The publication is sent to members as part of their membership package.

This year we thought we would look at redesigning the front cover in more line with the character of the organisation.

If you know anyone in that type of work, please contact us at: admin@nswfootballhistory.com.au

It’s important to acknowledge that notwithstanding, an outstanding on field season by Taylor Walker the selectors have concluded due to recent events it would be inappropriate to consider Taylor for selection in the team. 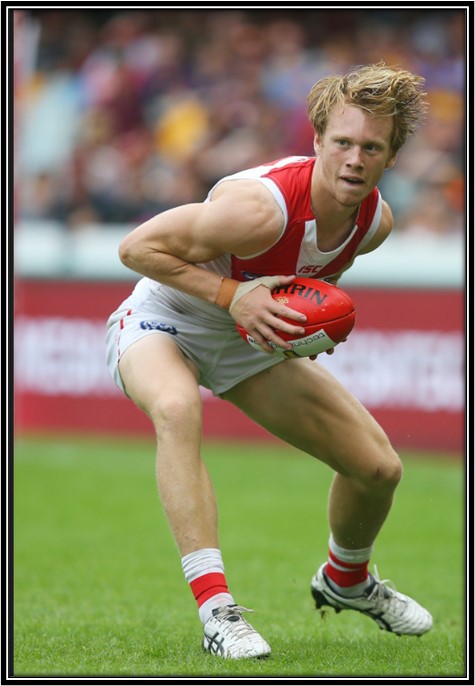 Callum Mills emerged from quarantine to play a pivotal role in the Sydney Swans’ surge towards the top four on the AFL ladder and to make a late-bid for this year’s Carey Bunton Medal for the best player from NSW in the AFL based on the votes for the AFL Coaches Association Award.

Mills scored five votes for his brilliant performance in the Swans’ win over Essendon at the MCG last Sunday.

Mills is now on forty-two votes and closing on leader GWS Giants Jacob Hopper (48 votes), and swept past Adelaide key forward Taylor Walker (38 votes), who was the early season leader.

From the turn of the 20th century until the advent of WWII, football in Hay revolved around a local four-team competition and inter-district challenge matches against near-neighbours Moulamein, Balranald and Deniliquin as well occasional forays east by train to play in Riverina “knock-outs”.

The local teams were Federals, Imperials, Suburbans, and Gymnasiums (from Hay Gymnasium and Social Club). The Hay Association played under the rules of the South-West District Football Association based at Narrandera.

Upon reformation of the Hay footy club after the end of WWII, there were concerted attempts to participate in inter-district games to heighten interest in the game in the town but again the problem of distance frustrated the club’s efforts.

For the 1950 season the Hay Rovers (as the club had become known) joined the Leeton & District FL (170 kms) which comprised of teams from Darlington Point (120 kms), Beelbangera (near Griffith), Leeton Ramblers and Yanco (near Leeton).

This morphed into the western zone of the South West District FL reserves competition from 1951 to 1955 that ended when that league decided that reserves teams would play with the seniors on a Sunday.

Meanwhile, the Hay club had decided to move in another direction, and in 1952 went south to the Edwards River FL based around Deniliquin (125 kms away) made up of Blighty, Conargo, North, East and West Deniliquin to save travelling. However, this competition folded in 1961 when the Murray league required Deniliquin to field a reserve grade side.

Hay moved on again in 1962 – going east again, this time to the Barellan & District FL. While Barellan was 180 kms away, other clubs such as Darlington Point, Yanco, Yenda (near Griffith, and Coleambly (all on the western perimeter of the league).

Long-time Hay football club official and Hay Shire Councillor, Robert “Buck” Howard (pictured right) recalls Hay being very competitive in the Barellan league, “We more than held our own and had some great clashes over the years with teams like Sandy Creek, who were very strong, and Beckom.”

“It was a shame that the league folded at the end of 1971, we didn’t want to leave”, he told me in an interview for this story.

The demise of the Barellan league as a result of Kamarah-Moombooldool, Sandy Creek and the Barellan-Binya football clubs amalgamating to form Barellan United, Coleambally moving to the Coreen league as well as Yanco and Darlington Point folding forced Hay to look for yet another competition.

All approaches to play in leagues to the east and south were rejected on the basis of distance – “too far to travel for our clubs”, was the response from the South West league (Narrandera-185kms/Wagga 270 kms) and the Echuca  (200 kms) & District league which included three teams north of Echuca based in NSW viz. Mathoura, Bunnaloo and Moama.

The Hay Rovers were left with no choice but to start a local competition once again; this time with four teams of sixteen players played on a Saturday afternoon on the Hay Park Oval. The teams were named after clubs in the VFL – Hawks, Tigers, Bombers and Saints. Players were graded and drafted to the respective teams.

“The games were played in a really good spirit, although some matches became heated, but after the game we’d all have a beer together at the Caledonian (Hotel). It did overcome the problem of travel but we all wanted to play against teams from other towns, and we needed to have under-age competition for the younger boys,” “Buck” Howard who played for the Saints.

“Going south of the border has enabled us to find the right level of competition”, Buck added.

Hay have found a home in the Golden Rivers league, of which they have been a member since 1981, the longest period the club has spent in a competition outside the town and district.

The Lions are currently fifth on the ladder and are drawn to take on fourth-paced Quambatook at home on the Hay Park Oval this Saturday (17 July). The Reserves are running sixth, Under 17.5s are 2nd, and Under 14.5s are fourth place. Auskick is run on Thursday after school followed by a sausage sizzle.

Additionally, there are six grades of netball ranging from youngest playing Net-Set-Go to the seasoned campaigners playing F Troop. Two buses head off to away games, the first at 6 am and the other at 7.30 am, such is the size of the Hay contingent.

Covoid restrictions by the Victorian government may prevent this round from taking place even though there are no cases between “Hay, Hell and Booligal”…

Recently, Hay played old rival second-placed Moulamein at Nyah West in order to enable the opposition’s Melbourne-based players to play. The Hay Lions knocked-off their more fancied opponents with the best second-half display in five years according to Buck Howard.

“We’re on a roll, we’ve got momentum” Buck told me, reflecting the optimism and can-do spirit that has defined the history of football in Hay since 1876. 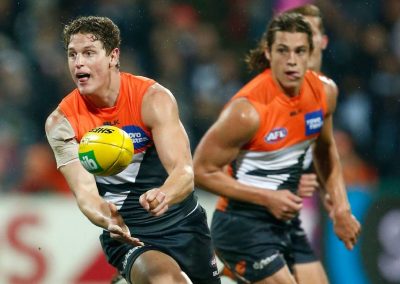 GWS Giants’ mid-fielder Jacob Hopper has lengthened his lead in this year’s Carey Bunton Medal for the best player from NSW in the AFL based on the votes for the AFL Coaches Association Award.

Hopper is now on forty-eight votes, well clear of Adelaide forward Taylor Walker, who missed through injury, and dashing Swans mid-fielder Callum Mills, who missed polling a vote in the stunning win over the Western Bulldogs at Marvel Stadium. 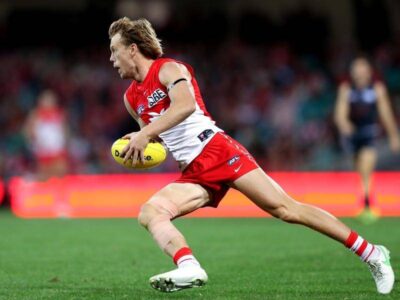 Sydney Swans mid-fielder Callum Mills scored seven votes in the Carey Bunton Medal for his stand-out performance in the Swans loss to Melbourne in round eight at the MCG.

Mills is now on 20 votes for the season and is closing in on the award leaders Adelaide forward Taylor Walker on 28 and Jacob Hopper of GWS Giants with 23. 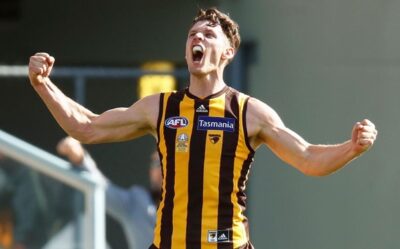 The AFL Rising Star for round six young Hawthorn forward Jacob Koschitzke made a big impact in only his fifth game by booting six goals in the Hawks’ 3-pont win over Adelaide in Launceston.

He scored six votes from the AFL Coaches Award, and the Carey Bunton Medal for the best player from NSW in the AFL this season.

Koschitzke, who was drafted to Hawthorn in last year’s draft, was recruited from Albury.

The only other NSW player to poll votes from the AFL coaches in round six Lachie Schultz (Moama), who received 4 votes for Fremantle in their convincing win over North Melbourne.