Peter Nillson and I were timekeeping for the Premier Division Elimination Semi Final on Sunday 20th September in what turned out to be an absolute thrilling last quarter.

Pennant Hills finished the home and away season in fourth position and St George right behind them in fifth place.

Last weekend’s match at Henson Park in Sydney would see the winner progress, and the losers hang up their boots for season 2020.

The weather started the day dreadfully, with pouring rain early in the piece however by the time of the 4th and last game of the day, the skies were blue, the sun was shining and the ground had absorbed the rain well to provide a great surface for football.

Pennant Hills took an early lead to head St George 4-1 to 2-1 at quarter time.  There was no wind advantage for either end and the Demons extended their lead at half time to 21 points, 7-7 to 4-4.  Penno were looking good.

The third quarter, often called “the premiership quarter”, was all St George with Pennant Hills restricted to just three behinds.  The Dragons grabbed the momentum with 6 unanswered goals to go to the last break 10-6 to 7-10, a 14 point lead.

The final quarter would have to be one of the best quarters I have seen in more than 50 years watching, and in my 23 years of timekeeping for finals matches in Sydney.  The first three goals of the final quarter were to Pennant Hills to give them back the lead by 4 points.

It then went goal for goal, with each of the next six goals in the game changing the lead.

After Pennant Hills grabbed the lead the difference between the two sides was never more than 4 points, and was just one point at one time; the crowd of a couple of hundred was enthralled.

Unbelievably there was 8 minutes 50 seconds of time-on in the final quarter in this 20 minutes plus time on game.

Pennant Hills last score was a behind, and then there was an out of bounds kick.  When the final siren sounded, St George, just four points in front, were on the far wing and again looked likely to head into attack.

Both sides are to be congratulated for their never-say-die attitude in that iconic last quarter.

As we move into finals time around the country, spare a thought for the organisers of the game in Sydney who, in 1906, could not secure an enclosed ground for one of their finals and it had to be postponed.  Not only was it postponed but the game ended up being played as a curtain raiser to a Sydney rugby league final on the SCG the following week.

But the best was saved for the following year when the league could again not secure a ground for their challenge final (grand final) between Sydney and Newtown Clubs.

Because of this the game was also postponed for one week until they finally came up with a venue in the middle of Kensington Pony Course, which is now the site of the University of NSW.  The 3:00pm game was won by Sydney 1-6 (12) to 1-4 (10) certainly the lowest grand final result in the history of the game in Sydney.

The curtain raiser was a match between Fort Street Superior Public School and Melbourne’s Albert Park school for the title of the champion school in the two states.  The game ended with both sides scoring 4-2 (26) and ending in a draw.

This problem of a lack of enclosed grounds was the genises of the search and final purchase of 12 acres of ground at North Botany by the league, called the Australian Football Ground. 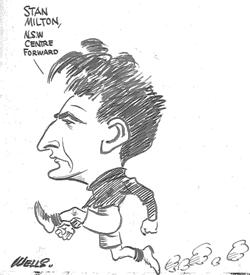 In researching the club games against interstate teams we came across a remarkable contest.

In July 1922, the West Torrens Football Club travelled to Melbourne then onto Wagga where they defeated a representative Riverina side 15.23 to 8.7 before a crowd of around 2,000 then onto Sydney where they were scheduled to play NSW on 15 July at Erskineville Oval.

West Torrens joined the South Australian National Football League in 1897 and were one of the solid performers early in the last century.  In 1991 they combined with the Woodville Football Club where they now participate in the SANFL under a combined title.

NSW made some changes to their side with McInerney, Wardley, Sheehan, Card and Newton out of the team that lost to Victoria the previous week.

West Torrens on the other hand had a number of star players including their 203cm CHF, Len ‘Booby’ Mills.

It rained all day on July 15.  Not heavy but a continual and misty downfall making playing conditions unpleasant.

The NSW side were far from their best with the South Australian’s all over them in the first quarter.  In fact the locals failed to kick a point with West Torrens in the lead 8.4 (52) to nil at the change!

No doubt many of the 6,000 strong crowd were ready to walk.  Nothing could be more embarrassing than seeing your own state representative team without a score on the board.

One pundit described West Torrens display as “A more systemic display of systematic football has never been seen.” They left NSW bewildered with their cleverly executed hand and foot passing.

It was during the third quarter that NSW really went to town booting a further five goals to the visitor’s one.  The sky blues were outstanding in their commitment to their game.  All were working together so much so that at the last change they had drawn level with both sides on 10.9 apiece.

By this time the crowd were right behind NSW and from the bounce they supported every move and every score the team made.

For a while the lead see-sawed but gradually and again through the agency of ace full forward, Stan Milton, NSW won the game by seven points, 13.12 (90) to 12.11 (83) in one of the most remarkable comebacks a NSW team has ever made.

Although Paddington player, Watson, booted three goals including the last for the game, Milton was awarded man of the match.  Others to stand out were rover, Jack Foskett from the Newtown club, forward flank Hurley, Cain in the forward pocket along with Ackers, Dunn and the captain, Bryan Rush all of whom played in the backline.

Many of these clubs played matches against a state representative team and a few against the leading city club of the day.

We are going to run a series of articles about such games.

In August 1927, before an attendance of 21,229, Carlton played Geelong in an exhibition game at the SCG .  Both teams were able to travel away from Melbourne because of the national carnival between all states, being played on the MCG.

On the following Wednesday Geelong accepted a challenge to play the leading Sydney club,  Eastern Suburbs, who at that stage, were undefeated with fourteen wins.

The venue was Trumper Park at despite being mid week, the 2,000 who attended were certainly not disappointed.

At 3:00pm, the Mayor of Paddington, Ald Maurie O’Sullivan, also the publican at the Lord Dudley Hotel, bounced the ball to start the game.

Geelong, who had some players in the Victorian team, fielded their strongest combination possible.  It included Jocka Todd who went on the win their 1927 B&F, the captain, Cliff Rankin, the immortal Cargi Greeves and Reg Hickey, all of whom were subsequently selected in the club’s team of the century.

Eastern Suburbs, on the other hand, had their share of players in the NSW side in Melbourne so as odds would have it, they were both represented by their best eighteens at the time.Â  All of the Eastern Suburbs side were able to get off work for the game.

Geelong seemed to have trouble with the small ground and took a while to adjust while Easts star full forward, Stan Milton, the league’s leading goalkicker in almost every year during the 1920s was at his best.  The play was close and tight however Geelong led 5.3 to 3.3 at quarter time.

Each side scored 5 goals in the second term and the play was again very evenly matched.  Despite their reputation, Geelong did not pull away from their opponents as predicted and in facts Easts commendably kept pace at every turn.  The score at half time was Geelong 10.8 to Eastern Suburbs 8.6.

The Cats were worried.  This wasn’t what the script said and they had trouble getting the machine that got them to third place in the VFL ladder that year in motion.

Both teams remained unchanged for the third quarter and finding they could keep pace with their far talented opposition, the Eastern Suburbs players seemed to gain in confidence.  Milton delighted onlookers with his clever play but this couldn’t shake Geelong’s lead with the score at the final change: 15.10 to 14.11

Although Geelong scored soon after the resumption of play, Milton and Hagger put full points on the board for the Sydney side getting them one point in front and holding their own against such a star studded team.

The lead then changed hands several times and it was only a goal from clever play by their captain, Rankin, who incidentially played rugby union in Europe during WWI, which gave Geelong the game by three points 18.17 (125) to 18.14 (122).  The goal brought his tally for the game to nine.

It was Milton who was  Eastern Suburb’s star.  The small forward booted eleven goals and nearly got his side over the line.

Best for Geelong were Rankin, Greeves, Todd, Hickey and Keppell while Easts were best served by Milton Crout, Saunders, Green and Dunn.

Top photographs shows George ‘Jocka’ Todd.  The one on the right is Cliff Rankin.

Rain caused a number of problems in the 1937 Sydney season and in round 10 it rained like there was no tomorrow.

One of the games in the round was between Sydney and Newtown clubs at Kensington Oval and because the ground was flooded, both clubs wanted to abandon the fixture but the league ruled that the game must go ahead.

Officials and players from both clubs decided on a unique method of overcoming constitutional difficulties and when central umpire, Tom King, took the field, one player from each of the reserve grade of both sides, which paddled out the earlier fixture, accompanied him and, after kicking two goals apiece, promptly left the field!

Other games in the round went on but most venues were under water with several registering a covering of up to 100mm deep in parts.

The action by the two clubs was frowned upon by the league but despite this the encounter was recorded as a ‘match’, no competition points were awarded, officials from both sides received a severe reprimand and a fine of two pounds ($4) was imposed on both clubs.

Not to be outdone only four weeks later following their muddy game at Kensington Oval, players in the South Sydney v North Shore reserve grade match resented the unsoiled attire of umpire Mick Bourke and  promptly rolled him in the centre wicket area bog after the game.  The incident went unreported!  Would that happen today?