The player regarded by many as the best player to ever play the game, Wayne Carey, has been named as captain of the Greatest NSW Team at the Carbine Club of NSW annual AFL Lunch today (9th May, 2019).

“The King” captained North Melbourne to two premierships in the 1990s and was selected in seven All Australian teams and was named captain four times. He won four best and fairest awards at North Melbourne and was leading goal-kicker five times. He captained the club from 1993-2001.

He began his football journey at North Wagga and strongly identifies with that club where his brother and nephews played. His boy-hood hero was the illustrious North Wagga captain-coach Laurie Pendrick.

The selection of the NSW Greatest Team was jointly sponsored by the NSW Australian Football History Society and the AFL NSW/ACT.

The panel was chaired by former Sydney Swans chairman and inaugural NSW/ACT AFL chairman, Richard Colless, who is the AFL convenor for the Carbine Club of NSW.

Nearly 500 NSW players have since 1897 played senior football in the VFL/AFL and a smaller number in the SANFL.

There have been various attempts to select teams that represent part of NSW, e.g. Southern NSW/ACT, Riverina and Sydney teams. And there have also been a number of teams selected by historians and supporters that have been posted on the internet.

There has however, never been an official NSW team that embraces the game’s 140-year history and includes every part of the State in which the game indigenous has been played.

One of the issues is that there has never been a natural senior competition in NSW. Broken Hill, Sydney, and various Southern NSW and Riverina Leagues have at one stage or another been ascendant.

Nonetheless the game has a very rich history in NSW and the selection of the Greatest Team represents a major celebration for Australian Football in this state. 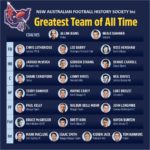 Click here for criteria and bio of each player