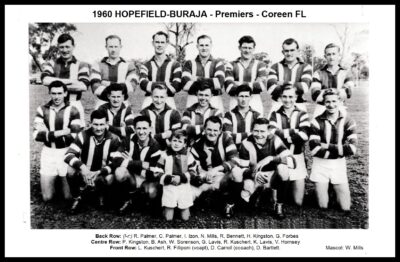 Late in the third quarter of the 1960 Coreen Football league grand final young Jerilderie defender Stan “Brickie” Taylor in a desperate effort in defence to halt the relentless attack on goal by Hopefield-Buraja collided heavily with the behind post snapping it off at ground level.

It was only rural ingenuity that enabled the game to continue at the Daysdale Recreation Reserve. A farmer just happened to have a star picket fencing post in the back of his ute that league officials managed to attach to the point post using fencing wire and drive it back into the ground.

Buraja had gradually pulled back Jerilderie’s lead established through a commanding first quarter score of 28 to 8 to lead 8-11 (59) to 8-8 (56) at three-quarter time.

With the delay in replacing the post and the third quarter break it was expected that Jerilderie would recover but the combine (H-B) swept to victory by kicking 3-1 in the final quarter to Jerilderie’s 1-1.

The Hopefield-Buraja club had been the result of a merger for the 1947 season between two of the foundation clubs when the league was formed in 1894. Usually with mergers, the first name becomes the nomenclature for a club, but in this case, mainly because games were played at Buruja, this became the popular name

Jerilderie had come into the league in 1957 from the Murray League Seconds. The Demons, as they became known in 1961 won the premiership in 1963 by beating unbeaten Daysdale, after having won only one game in the previous season, transferred to the Murray Football League in 1964.

Jeriderie returned for the league’s centenary season in 1994 when the Daysdale, Oaklands, and Hopefield-Buraja clubs also celebrated their centenaries.

This bought the number of clubs in the league up to ten: Coleambly, Jerilderie, Daysdale, Rand, Hopefield-Buraja, Coreen, Oaklands, Rennie, Urana along with the Victorian-based club, Wahgunyah.

However, by the 2007 season the continuing decline in the population in the district particularly of the drift of young people to the regional towns and metropolitan cities for further study and employment, the league was reduced to six clubs.

Ironically, all of the original clubs were involved in the grand final albeit in a merged form – CDHB United – an amalgamation of Coreen, Daysdale, Hopefield and Buraja defeated the Billabong Crows made up of Urana, Cullivel and Oaklands. And the grand final was played at Rennie.

CDHBU and the Billabong Crows are now in the Hume League, as are Rand that merged firstly with Walbundrie, and then with Walla while Jerilderie and Rennie are in the Picola League, and Coleambly is in the Farrer League.

But as Alan Norman documents in his excellent book Coreen & District Football League Finals History, in 1960, it was Hopefield-Buraja that scraped into the 1960 Coreen Football League finals with a draw over Rennie in the final round to edge out Urana-Cullivel, and then went all the way through the finals to win the premiership.

The estimated crowd at the grand final was 1600.

The Dennis Trophy for competition best and fairest was won by Daysdale’s David McFarlane one vote ahead of Urana-Cullivel’s Max Urquhart, who went onto play at Collingwood from 1963-69. The leading goalkicker was Hopefield-Buraja’s Bruce Ash with 51 goals.