Australian Football celebrates its 140th anniversary in NSW this year after the founding of the NSW Football Association in Sydney in 1880.

Rod Gillett profiles the nomination of Jack Hawkins for the Hall of Fame: 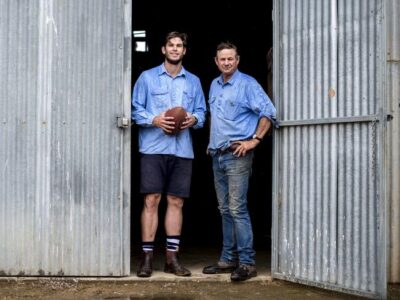 Tom and Jack Hawkins on the family farm in Finley in southern NSW Photo: Herald-Sun

‘Jumping Jack’ Hawkins went about his footy in a different way to his famous son Tom but his high flying marks in the 1970s and 1980s gave Cats fans a nice warm up for what was to come 26 years later.

While Tom’s career is still going strong at 32 Jack’s was sadly cut short by a knee injury at only 27. He returned home to Finley to run the family farm and play footy but the injury restricted him to just 2 games.

His contribution to footy however was far from over and Jack has helped run the Finley Football Club and the Murray Football League for more than four decades.

Not surprisingly his extended time in NSW footy has been supplemented by plenty of time watching his son carve out a stellar career at his old stomping ground, Kardinia Park. Looking back at his time there Jack says he couldn’t have ended up at a better club.

“It (Geelong) was a great place for a country lad to be. I was very comfortable. And as a farmer, I found a wife!” he told me for this story.

Jack studied agriculture at the Marcus Oldham College and then worked on a farm just outside Geelong. But at the end of each football season he would head back to the family farm for the harvest and not return until the end of January. It was the age of the part-time footballer.

On the field he was renowned for his vertical leaps to take marks on the last line of defence. A team-mate, Phil Stevens bestowed on him the nickname, “Jumping Jack”. Then colourful VFL commentator Lou Richards got hold of it, and it stuck.

He played 182 games and kicked twenty goals for the Cats from 1973 to 1981. He also represented Victoria.

Upon returning home, Jack joined the committee, and later became president of the Finley Football Club from 1987-89. He also served on the Murray Football League executive from 1990 before having a spell for five years then he returned as president in 2009 until he stepped down at the end of the 2017 season.

During his period in office there was a transformation in the Murray league with new clubs such as Tongala, Moama, Echuca United and Rumbularra coming in, and the exit of foundation clubs: Tocumwal, Berrigan and Strathmerton to the nearby Picola & District League.

Also towards the end of his term, Tungamah and Katandra came into the competition after a dispute between the Picola league and AFL Victoria to bring the number of clubs up to 14.

Jack also became a selector for NSW State teams at the behest of old mate and rival Terry Daniher, who was coach of the NSW State team while coaching Wagga Tigers at the time. This included the match against the VFA as a curtain-raiser to the Victoria v South Australia match at the MCG in 1995 when Teddy Whitten was emotionally farewelled.

It was to be the VFA’s last-ever representative match. NSW had first played the VFA in 1881.

Jack would drive up to Wagga for training accompanied by prospective State players from the Murray League, a round trip of almost five hours.

“It was a lot of fun with TD. There was nothing complicated about training. He kept it simple. But he would tell a player if he wasn’t up to the required level. There was always a convivial drink afterwards”.

The connection between the Geelong and Finley footy clubs runs deep in the Hawkins family. Jack’s brothers, Michael and Robb, also both played in the VFL for Geelong. Michael and Jack played together for Finley in the 1971 premiership win over Deniliquin.

Jack’s eldest son Tom has already played in two premiership teams and kicked 594 goals in the AFL. Tom is the current leader in the Coleman Medal at the end of round 17. He also leads the Football History Society’s Carey-Bunton Medal for the Best NSW player in the AFL. Younger son, Charlie is playing for Old Geelong in the Victorian Amateurs footy after beginning at Finley.