At a meeting of the Australian National Football Council (National Football League), since absorbed by the AFL, on 21 July, 1969 sent a telegram to the US President, Richard Nixon offering their congratulations. 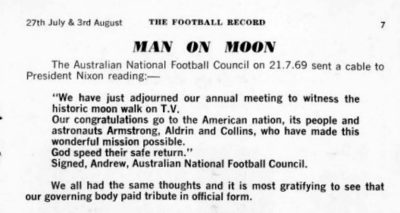 “Andrews” was Bruce Andrews, then secretary of the ANFC.