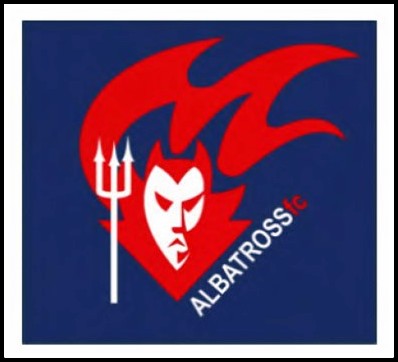 History of HMAS Albatross The decision to build an airfield at Nowra Hill was taken soon a?er WWII was declared in 1939. The RAAF occupied the new base on May 1942 and were soon followed by the US Army Air Corps and the Royal Netherlands East Indies Air Force.

The Royal Navy’s Fleet Air Arm began operations at Nowra in late October 1944, and the base was renamed HMAS Nabbington. In March 1946, the base reverted to RAAF control ‘to be retained but not maintained’.

With the decision to form the RAN Fleet Air Arm HMAS Albatross was commissioned on 31 August 1948.

Short History of South Coast Australian Football League (SCAFL)
The original South Coast AFL was formed in 1969, comprising Albatross, Creswell, Nowra and Wollongong. In 1970 the Bomaderry club was formed and in 1972 Dapto joined the competition.

In 1975, Wollongong and Dapto left the league to create the Illawarra Australian Football League. They were joined by Bulli-Woonona (now known as Northern Districts), Port Kembla and Shellharbour, three clubs who had conducted junior programs but were now introducing senior football.

The sixth foundation club of the senior league was the University of Wollongong.

History of Albatross AFL
Prior to the formation of the AAFC in 1968 many Albatross based players joined clubs in the SFL, namely South Sydney and Sydney Naval (1944-1971 and formerly Sydney FC 1880-1944). Teams also represented Albatross in various midweek/knockout competitions against other ships and military establishments as well as the NSW Police team.

The AAFC as a distinct entity in a local competition was formed in 1968 to then become a founding member of the SCAFL in 1969.

2005 would see the last time the AAFC would make a First Grade grand final and whilst not successful the Reserve grade won the flag in that year. From this period declining player strength due to a number of factors hampered the club.

Competing in reserve grade only in 2013 provided the last Premiership Flag before diminishing player participation in the Shoalhaven resulted in the 2016 merger of the Albatross Demons with the Nowra Blues to become the Nowra Albatross Vikings.

The home ground of the AAFC is the Tom Smith Oval named after the club legend, Tom and his wife Marlene were the core fabric of the club from formation in 1968 and with continued involvement until their respective passing in 1999 and 2012.

The photographs following this narrative contain images of Tom and Marlene together with images of Tom’s iconic timeclock, honour boards and various premiership teams!!  Click this to see images.