In the late 1880s Australian Football in Sydney struggled.  It had a number of adversaries and many of those were set against the advancement of the game.  Why?  It is a long story and we are soon to publish a book on what happened to Sydney Football, particularly in the decade of the 1880s and into the 1890s before it died in 1895.

The 260 page book is full of facts, quotes, tables and conclusions.  It will prove a fascinating read for the real football follower who is into history of the game.  We will keep you posted on its availability but bear in mind, copies will be limited.

However we found something that might interest you:  It is the formation of a club at Granville in 1889

Granville is a suburb of Sydney approximately 25 kilometres west of the CBD and the centre of an important rail junction.  It was gazetted as a municipality in 1885 and the ground the team played on at Clyde, was an adjoining suburb. In the 1880s the area became Granville, in honour of the then British Foreign Minister, Lord Granville. Five years later, the Municipality of Granville was declared: it encompassed all or part of the modern suburbs of Camellia, Rosehill, Harris Park, Granville, Clyde, and South Granville. Then it was a village, certainly not a suburb.

By the 1891 census the population had increased to an incredible 4000 people.  Interestingly Brunton and Company, a large Melbourne based flour milling concern trading as Australian Flour Mills, extended its operations to Sydney in 1887 which gives support to the theory that it may well have relocated or employed Victorians.  Certainly one, John Spencer Brunton, the son of the founder was of the right age to play and in fact a Brunton was recorded as playing for the Sydney FC in 1889. 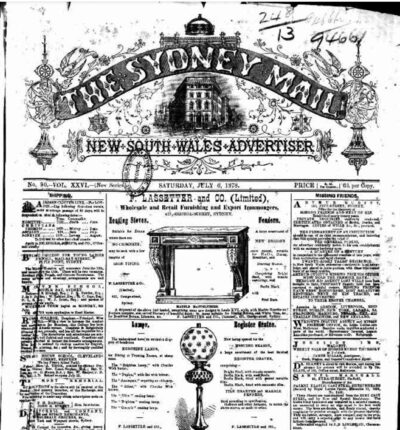 “The Australian Game. — Everything seems to forbode that the players of the Australasian rules will have this winter the brightest season that they have been blessed with since the game was started in Sydney. From every side comes news of the advancement the old clubs have made, and of the accession of strength gained by the comparatively new ones; and, to make the prospect still brighter, Mr. George Graham, who for several seasons has been one of the crack members of the redoubtable Sydney Club, sends along word that he has succeeded in bringing into existence a club at Granville, to be called the Australian Football Club. Many players are already hard at work training, and some well-contested matches are expected for the Flanagan Cup (Sydney competition trophy of the time). Although a few have been found who have objected to the association’s action in accepting a cup, saying that it will injure instead of promote the interests of the game.

The result, so far, has been to arouse in the secretaries of the various associated clubs a surprising amount of activity in hunting after all new members worth having, and in keeping together the old ones. The fact that the secretary of the association has been successful in his efforts to obtain the use of one of the ovals on the Agricultural Ground (RAS Showground, Moore Park) for cup matches will be a source of satisfaction to all players and supporters of the game. Now the Sydney public will be afforded an opportunity, not at their command in previous seasons, of seeing Rugby and Australian rules played side by side by the best exponents of the two games available in the city. The votaries of the Australasian game hail with delight the opportunity that will thus be thrown in the way of the public to form a comparison between the two games. Paid umpires will be employed for the cup matches, which will be another gratifying feature of the season, and which will make the play faster and more exciting. ” Evening News (Sydney, NSW : 1869 – 1931), Thursday 25 April 1889, page 8

Below is the 1889 Granville fixture we have been able to find, so far.  During this period of the Australian game, goals were worth one point and behinds, although at times shown, were not counted in the final score.  This changed in 1897.  How the term ‘behind’ was derived, was when the ball was taken ‘behind’ the goal line but not through the goal posts.  Rugby also used this term in their early days.  But, unlike Australian Football, was very seldom displayed.