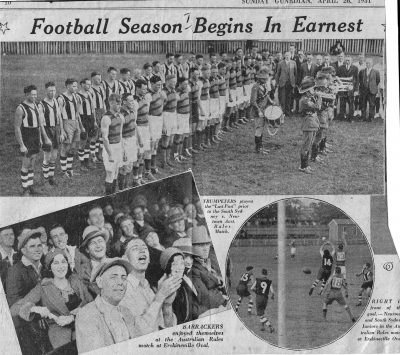 A report in a leading Sydney newspaper of a Sydney match to start the 1931 season (a mere 90 years ago) between Newtown and South Sydney played at the old Erskineville Oval – yes there were two.

The article, along with a total of four images, was printed in the Sunday Guardian of 26 April of that year and highlights the effort the league went to for ANZAC Day with both teams and officials lining up before the game and several members of a marching band sounding the normal salute for the day .

Australian Football was reported on in all Sydney newspapers before about 1982, and some, like the one referred to in this article which gave a good review of all the games played in the city. Reporters from most Sydney newspapers would attend all games and as you can  see from one of the attached images below left, the Labor Daily journo even had its own logo for his reports.

Unfortunately there were only six clubs in the senior competition in 1931, Newtown, South Sydney, Eastern Suburbs, Sydney, North Shore and St George with the latter two the only sides still functioning today.

There was a veiled suggestion, certainly supported by Jim Phelan, secretary of the NSWAFL from 1915-24 and after whom the Sydney first grade B & F Medal is named, that the code could only get (find/lease/rent) three grounds where an entry fee could be charged and in those days, when the league operated the gates at all grounds, the fee charged for admission was vital to the very existence of the game.  So there was a certain section of the league who felt that any more than six clubs, playing at three venues with facilities for an admission fee, would be detrimental to the game.  Yes there was a ‘second division’, ie the Metropolitan Australian National Football Association, which operated mainly in the inner city suburbs, but that is another story.

It was common to see regular photographs of players and officials in newspaper articles as well as reports leading up to and results of the games each week.  There were also reports of club’s annual meetings and other items of interest.  Sadly, this situation is long gone with now only news of national games in all codes getting reported.

We would dearly love one of our supporters who might lend a hand by colouring some of our black & white photographs.