Match of the day: The Rock-Yerong Creek v Holbrook
Extract from Episode 11 A Season in the Country: Across the Wheatbelt by Peter Clark published on the Footy Almanac website.

The round 11 match was played at league headquarters Yerong Creek, as were all finals matches in 1975. We will visit Yerong Creek in later episodes, during the finals, therefore this week we travel 20km up the Olympic Way to the village of The Rock for our ‘tour of the town’.

The small town of The Rock nestles snugly under its namesake geological formation called Kengal by the Wiradjuri people. The landform was once named ‘Hanging Rock’, but after an overhang broke away in 1874, its name was likewise simplified. The impressive landform (elevation 364 m) rises above the surrounding wheat, canola and sheep grazing country and offers climbers spectacular views towards distant peaks and ranges in the east and the vast Riverina plains to the west. Viewed from close range it reminds the onlooker of a slowly sinking ship with its dipping sedimentary rock layers.

The quiet railway-side service town features an attractive main street with a central avenue of trees standing as a memorial to the local soldiers who fought in World War I. Typical of many Riverina settlements, a collection of buildings with wooden verandas adorn its main thoroughfare. The Rock Recreation Reserve (commonly called ‘Victoria Park’) is an idyllic setting for a game of football or cricket with ‘The Rock’ spectating the action from on high, seemingly just a long kick or a big hit away.

The Grasshoppers were given an outside chance of toppling the Magpies at Yerong Creek after their impressive away win against Collingullie before the bye. But it was going to take all their guns to fire with captain coach John Cornish, Phil Rau and Richard Hamilton vital to their chances of success. Meanwhile TY-YC were developing a powerful goal to goal line with spearhead Bob Driscoll in fine form. 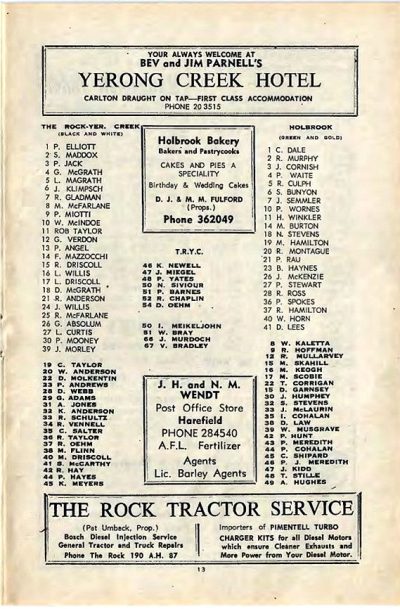 Holbrook made the early running, but the home side cut them to ribbons in the second term with big ruckman Greg Verdon in splendid form. A leg injury to Verdon, later confirmed as a season-ending broken leg, saw him sidelined after half time and his absence may have contributed to a ragged third quarter by the Magpies. Holbrook, brilliantly led by John Cornish, pegged back the lead slightly before the home side put the foot down again. Bob Driscoll booted seven goals for the winners taking his season total to 41.

Around the Farrer League Grounds

Wagga Tigers 11-17 (83) took the honours against North Wagga 10-11 (71) in the battle of the top two. Henty enjoyed a come from behind 18 point win over Collingullie thanks to a heavy hailstorm after half time, which took away the influence of the Gullie’s dominant big men led by Ron Murray. MCU were inaccurate with 11.23 but it did not cause them any worries against Culcairn who only managed to kick five goals for the afternoon. Lockhart kept Temora at bay, running out winners by 44 points with newly appointed coach Jeff Nimmo giving a masterful exhibition in the centre.

Bob Driscoll, farmer -come-butcher, was known as “The King” at The Rock-Yerong Creek. He was a versatile footballer who could play anywhere from centre, his favourite position, to the half forward line or at full forward. He was blessed with perfect balance and was a proficient kick on both feet. Driscoll commenced his footy in the centre but knee problems caused him to spend more game time in the forward line, where he excelled both in the goal square and hunting for the ball out on the flanks.

Bob played all his football with his home club TR-YC with the exception of one year with Grong Grong Matong in 1972 where he also represented the SWDFL. After returning to the Magpies, he coached the club in 1977 and ‘78 and was a regular Farrer League representative. Bob won best and fairest awards at TR-YC and won the Farrer League goal kicking in 1975 (82 goals). In 1976 he kicked 109 goals, which placed him second to Laurie Pendrick (North Wagga) with 114. During his playing days he was highly respected by opponents and was a popular player in the league. Later, Bob served the Farrer League as a selector.

Like scores of country footballers, Bob Driscoll gave many years of service to his club in a variety of roles: as a player and coach, and later as an administrator after his playing days finished. In recognition of that service Bob is a life member of the club and in many ways he is the “heart and soul” of the TR-YC Football Club. Bob masterminded the Magpies flag in 1986 (their first premiership as an amalgamated club) and has been heavily involved in their subsequent premierships. He has remained very passionate about the game and his club, was a highly successful club president and is still active on the committee today.