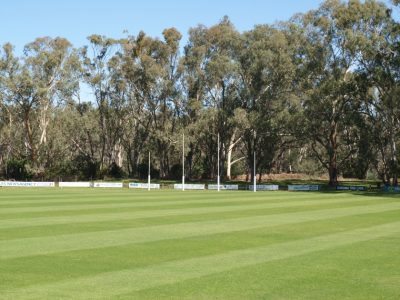 In this story of Corowa’s John Foord Oval we will look at the riverside sporting venue’s history and take a nostalgic trip back to a typical winter Saturday at the ground in the 1960s.

As football leagues were starting to spring-up in country places throughout Victoria and the Riverina, a popular movement was initiated in the Murray River town of Corowa that helped build the pathway to Federation. The ‘Corowa Conference’, organised by the Corowa Federation League, was held in the winter of 1893, the same year the Ovens and Murray Football Association was formed. This first People’s Convention set in train the practical measures essential for the acceptance of a federal constitution. Hence, Corowa is known as the “Birthplace of Federation.”

European settler, John Foord (1819-83), took up land south of the Murray in the 1850s and established the ‘Wahgunyah Run’. Apart from his agricultural pursuits, Foord became a punt owner and bridge builder. He established Wahgunyah in 1856 and three years later purchased land north of the river for a new settlement to be known as North Wahgunyah (Corowa). The settlement thrived amid the north east Victorian goldfields at a time when river transport was prosperous. In 1892 an iron bridge was built over the Murray at Corowa, later named after pioneer John Foord.

A football ground is also named in his honour. John Foord Oval is situated just above the banks of the Murray River at Corowa, right beside that historic bridge. The ground was officially known for many years as the Corowa Recreation Reserve. In 1884, 20 acres of land along the Murray River near the bridge was set aside by the NSW Department of Lands as a recreational reserve.  The location of the ground presented one serious, recurrent obstacle – inundation by floods. Year after year damage was done to the fencing and the surface of the ground by wash-outs and the unwanted deposition of sand.

Let’s go back 60 football seasons, to July 1961, and visualise the atmosphere at John Foord Oval during a game between the home side and Wodonga.

The sign at the entrance to the reserve boasts the name ‘John Foord Oval’, home of the Corowa ‘Spiders’. Cars carrying families of home team and visiting supporters roll through the gates and head for the prized boundary-side spaces on the river side of the ground.

The savoury-smell of steaming saveloys wafts through the air as spectators settle into their seats around the fence in readiness for the game. Many in the crowd read their ‘Critic’ football programs to learn snippets of club news and check on the names and numbers of opposition players.

A roar suddenly explodes from the Spider’s change room as the door springs open and twenty players emerge. In single-file they run and skip towards the ground entrance gate, before spilling out onto the oval greeted by toots of car horns, cheers and claps from the home crowd. The visitors soon follow with a slightly more subdued reception.

The crowd has built up nicely and Corowa supporters are shoulder-to-shoulder near the clubrooms on the north western side. Clothed in felt hats and grey coats, men puff on their smokes as the anticipation of the contest grows. Women chat, some dextrously knitting, as they wait and watch. By their sides sit cane baskets filled with afternoon tea and a thermos or two. Fully sun-lit, the ground is ready for the afternoon’s action as a hush falls over the crowd. As players take their designated positions the shrill sound of the umpire’s whistle signals the imminent start of the game. Cheers and supporter’s calls break out, “Carn the Spiders!” and “Come on Bulldogs!” The orange-red leather is bounced and play gets under way.

Today, visitors to the ground are welcomed by a tree sculpture featuring footballers rising to mark the ‘Sherrin’. The sculpture symbolises the unique character of the ground and the game – the football being contested amid the backdrop of river red gum trees. Another iconic feature of

John Foord Oval is the Fred Swift Stand, named in honour of Corowa’s 1968 rags-to-riches premiership captain coach. The original wooden grandstand, named after 1932 premiership captain coach Ray ‘Nana’ Baker, was destroyed by fire. The wire netting fence, with its concrete posts, together with the scoreboard on the south eastern flank are other reminders that we are at the home of football in Corowa.

The club and the oval are linked with local football names such as: Baker, Sandral, Longmire, Chisnall, Lane, Lambert, Tait, Tobias, Way, O’Donoghue, Houlihan, Spencer and Bartlett. But they are also associated with footballers who came to Corowa from further afield and had a big impact. Fred Swift, Frank Tuck, Bill King, John Hoiles, Tommy Lahiff, Jack Clancy and Peter Tossol fit that category.

The Corowa ground was one of the regular venues for Ovens and Murray League grand finals and other finals in the era between the wars. Let’s look at one of those matches.

The 1919 Ovens and Murray Football Association premiership-decider between Lake Rovers and Howlong, played at Corowa, featured “a count” and a thrilling finish. In the third quarter the captain of the Rovers called on umpire Chrisfield to line up the Howlong players for a count. The check revealed that Howlong had 19 men on the ground. Under the rules, Lake Rovers were entitled to have their opponent’s scored ‘wiped off’, but they decided against it. Play resumed and Howlong put up a strong challenge in the last quarter, coming to within two points of the lead, but responding with two goals, the premiership went to Lake Rovers. Final scores: Lake Rovers 6.7 (43) d. Howlong 4.4 (28).

A new structure, the Federation Bridge, spans the Murray River at Corowa, while the John Foord Bridge remains as a local traffic crossing. A new chapter in the story of the union of the ‘colonies’ was written in 1979 with the merger of cross-border rivals Corowa (NSW) and Rutherglen (Victoria). The picturesque oval beside the John Foord Bridge lives on proudly as the local home of Ovens and Murray League football.