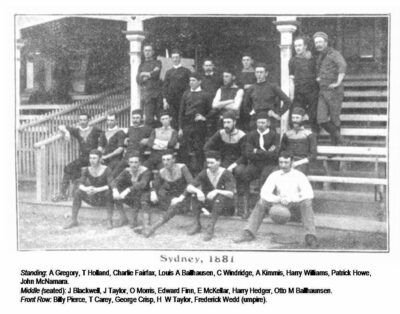 The first game of football to be played on the SCG was a game of Australian football between the Sydney and East Sydney clubs on Saturday 18 June 1881.

The ground was known at the time as the Association Ground and was primarily used for cricket. It was administered by the NSW Cricket Association that had been granted control of the ground in 1875 and following extensive work to fill and re-turf the field as well as construct a Grandstand it hosted its first cricket match in 1877.

Initially, all games of football were barred from the ground but following the election of the Association Ground’s leading trustee Philip Sheridan, as president of the NSW Football association upon its formation in 1880, the position changed.

There were only two clubs in the NSW Football Association at this stage; both were formed in 1880.

Here is an abridged report of the game from The Sydney Morning Herald (20 June 1881):

“EAST SYDNEY v SYDNEY:
These exponents of football under the rules of the NSW Football Association were fortunate in accruing fine weather last Saturday for their match on the Association Ground…
During the afternoon about 1000 persons were present including a number of ladies and there were 200 or 300 spectators in the grandstand…
Nash (East Sydney) and Crisp (Sydney) were the respective captains and play commenced about a quarter past 3 o’clock…
Play now became exceedingly lively and some very good drop-kicking was shown, little opportunities being given for little marks…
The superior play and knowledge of East Sydney became more manifest, and though the metropolitans struggled gamely, their skills proved no match for the determined and dodgy play of their opponents…
The game terminated at quarter past 5 o’clock in a victory for East Sydney by scoring 5 goals to 3; the victors also scoring the majority of behinds…”
(behinds were normally shown in the score but were not counted in the total in that period)

This match in 1881 paved the way for football at the SCG, not just for Australian football but also for rugby union (1882) and soccer (1884) that were also able to subsequently play inter-colonial matches at the ground.

However, the first-ever inter-colonial football of any code was played between Victoria and NSW on 6 August later in 1881 when the Victoria comfortably beat the NSW team, 9 goals to 1 before a crowd of 5000.

For most of the 1880s and early 1890s the SCG was the venue for NSW intercolonial fixtures against Victoria, Queensland, Tasmania and even New Zealand as well as visiting clubs including South Melbourne, Melbourne, Carlton, Geelong, Port Melbourne and South Adelaide.

South Melbourne played their first-ever match at the SCG in 1883 when they played a NSW representative team. South won easily, 9 goals to 4.

The SCG is now almost exclusively used for Australian Football League matches and cricket. But for football it all started with Sydney and East Sydney back in 1881.