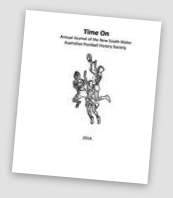 The Society has published their 2014 journal which will be posted out to members this week.

The 60 page journal contains stories and records of events of NSW and Sydney football from years goneby and will really be a collectors item.  Not only that it documents some very important events and people in Sydney football which, in some cases, have never been recorded before.

The Society will hold their annual Christmas gathering at Wests Sports Club on Tuesday with an invitation extended to members and those involved in the wider football family.  Santa has promised an appearance.

In other news, officials are currently in discussion with software programmers regarding the Representative Team database.  It needs work and a search has been in progress for some time in an effort to find

those who specialise in WordPress, the programme which operates the website.

More games are slowly being added to the website with another Sydney player, Bert Chapman, who started with the Paddington Club, went on to play with St Kilda in 1914, identified through family connections and a photograph of the player.  In fact Bert who only played seven games with the Saints before injury ended his career, was one of very few who had this image on cigarette cards of the day.