Have you thought about this?  Today (November 11) is Armistice Day 2021.
Dr Rodney Gillett looks back at the 1914 National Carnival, one hundred and seven years ago, that started just two days after World War 1 was declared and remembers a number of those, locally, who served. 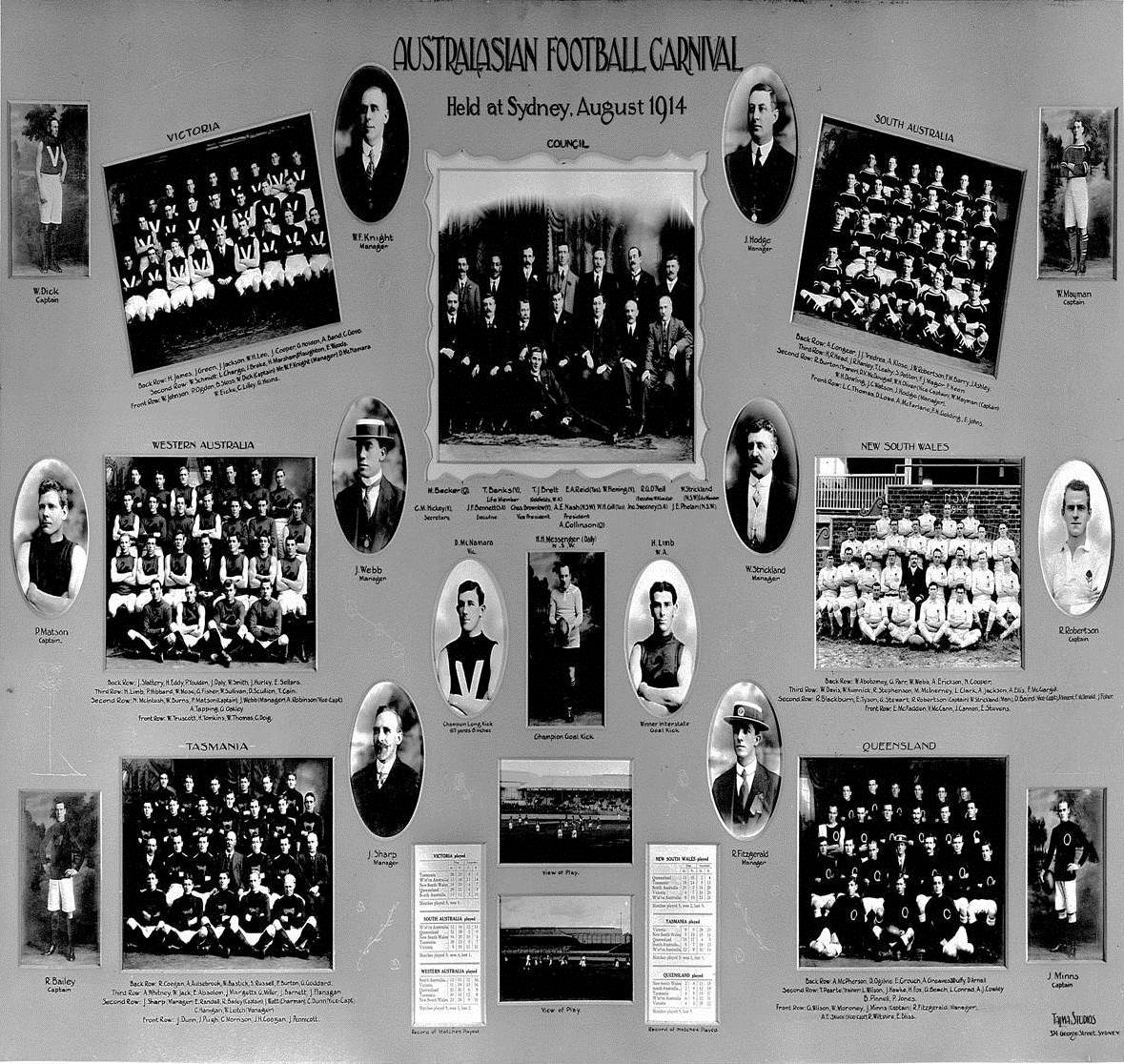 The best footballers from around Australia came to play at the ANFC Carnival in Sydney in 1914. The six states, Victoria, South Australia, Western Australia, Tasmania, Queensland, and hosts, New South Wales all played against each other in the same division at the SCG.

The first-ever interstate carnival played in Melbourne in 1908, was won by Victoria. The next carnival was held in Adelaide in 1911, was won by South Australia.

There were high hopes that NSW could follow the trend and secure a victory at home. The contemporary sporting press featured extensive coverage of the event and The Referee (1 August 1914) presented profiles on the players selected in the team in a double page spread.

The New South Wales team was coached by former Collingwood and Richmond mentor Dick Condon, who had moved to Sydney following a colourful VFL career that included a Copeland Trophy and premierships in 1902-03.  The Encyclopedia of AFL Footballers regards Condon as “probably the greatest player of his era”. Condon was referred to as “that fiery football genius” who possessed “a combination of brimstone oratory and skilful tactics” (The Referee 31 May 1914).”. He was a former team-mate of NSW manager/ assistant coach Billy Strickland at Collingwood. Strickland had captained Collingwood’s first-ever premiership in the VFA in 1896 and played in the club’s first season in the VFL in 1897.

The Sky Blues were led by North Shore skipper Ralph Robertson (formerly of East Sydney), who had led NSW at the 1908 and 1911 carnivals. In the preview The Referee (1 August 1914), stated that “Robby” had played the finest game on the       ground against Victoria at Adelaide in the 1911 Carnival.  Robertson was awarded the medal for the best NSW player at the 1914 Carnival despite missing the final game against Western Australia to enlist in the Australian expeditionary forces to fight in World War 1

(All-Australian teams were not selected until after WWII; conceivably, Robertson would have been selected in three as he was awarded NSW’s best player at each Carnival. He should be in the AFL Hall of Fame – Ed.)

Strong as Hercules, with a quick-thinking brain, Albert loses no time in getting rid of the ball, to the advantage of the side. And those side-steps of his are very effective. Vincent is very hard to shift off his pins.
Albert Vincent – centreman
Sydney (1906-1914)
NSW – 10 games

Meteoric — yes, that’s the word that fits Andy Ratcliffe. No wonder the spectators like to watch him. There is always something worth looking at when Andy grabs the inflated leather.
Andy Ratcliffe – wing
Central Western 1913-14 (Balmain 1915-17, Roseberry 1923)
NSW – 4 games
(Played 43 first class games for NSW as a wicket-keeper/batsman from 1913-14 to 1928/29 making four centuries with a top score of 161)

There are few — if any — of our footballers who have attained such popularity as ‘Shorts’ McCann. The harder the contract the more he appears to relish it. McCann is certainly wonderfully clever for his inches.
Vincent McCann – rover
Paddington 1912-1923 (YMCA 1910-11)
NSW – 9 games

Freddy is certainly the most attractive half back here; he is neatness personified. He has an exceptionally taking style, being dodgy, a good mark, and foot passes cleverly.
Frederick McGargill – centre half back
Sydney – 1911-1927
NSW – 7 games

Victoria proved far too strong for NSW in the final match of the minor round, winning by 136 points in what had been the biggest losing margin to date for NSW against Victoria. Robertson was best-on-ground, while also named in the best were follower Jack Webb (Central Western), Baird in the centre and McGargill across the half-back line.

By dint of having finished fourth after the minor round matches, NSW took on Western Australia in a play-off for third-place but the Sandgropers were far too accomplished and ran out easy victors by 104 points. Full-back Abotomey was NSW’s best player along with winger Andy Ratcliffe, replacement skipper Albert Vincent (filling in for Robertson who had enlisted), rover McCann and Paddington key forward Mick McInerny who booted 3 goals.

In the play-off for the championship title in front of a crowd of 14,000, Victoria defeated South Australia, 11.11.77 to 5.10.40 with their “big guns” St Kilda long-kicking superstar Dave McNamara, Collingwood’s first champion full-forward Dick Lee and South Melbourne’s star centreman Bruce Sloss (who was tragically killed in WWI) leading the way.

The full set of results from the 1914 ANFC Carnival:

* Did not return
**Died of war-related injuries